Conventional wisdom says that when an architect finalizes a house and the clients move in, that’s the end of the story. The project is finished. But not in the mind of Fort Worth architect Norman Ward, recently recognized as a Fellow of the American Institute of Architects for his exceptional work. For the visionary architect, the completion of a house is really its beginning. He believes a house has a narrative that unfolds between his early ideas of it and the life that is lived in it. That history, that connection between concept and reality, acts as a bridge, an image that turns out to be a powerful symbol that informs every aspect of the architect’s work. Ward invariably endows his high modern dwellings — usually characterized by an assembly of clearly defined volumes topped by simple roof forms — with courtyards, light wells, breezeways and porches. These transitional spaces embody the architect’s notion of the bridge, a connection that takes the house beyond the boundaries of its walls and adds other layers of meaning to each structure.

817 Home Is the idea of a bridge part of a design philosophy you have developed over the years?

Norman Ward I’m not convinced I have a philosophy. I have an awareness of things, such as terrain, and am interested in how to interpret my awareness. In the house I call “Bluestem,” which is my own, I became aware of and fascinated by how I could site it to take advantage of the landscape. Bluestem sits on a hilltop that I had fallen in love with some years before. I decided to place four pavilions under a single roof canopy, with three of the pavilions separated by breezeways. They were bridges that allowed the breeze to flow through the house.

817 You also use bridges to draw attention to something that might be overlooked or not appreciated as much as it should be.

NW At Bluestem, I raised the walkway under the roof canopy so that it became a threshold connecting the landscape on the south to the landscape on the north. They would ordinarily be separated from each other once the house was built, and you wouldn’t be able to view them together. To emphasize the connection even more, I continued the plantings into the breezeways as if the landscape owed through the house, connecting the north and south sides of the hilltop. For the Huynh house, which is in a subdivision, I used a window bridge in the front courtyard to focus the view to something besides other houses. From the courtyard, you can see through two windows that are opposite each other, one on the courtyard side of the room and the second just across from it on the exterior side of the room.

817 A bridge, then, creates a narrative for the house, doesn’t it? Your houses have a way of saying, “Here’s where the hilltop is,” or “Here’s what the sky is doing today.”

NW Yes, at that point a house has a language — it’s not really about how many square feet are in the pantry, but about how the person wants to live. For the Holub house, there are two bridges in the entry. One is a raised ipe walkway that connects the courtyard gate to the front door as it passes over the garden. The other is overhead: A slatted awning over the gate faces the front door’s overhang. I interrupted the connection there, leaving open air between the two so that the sky could always be viewed day or night.

817 A bridge isn’t a static thing, then? How does time figure in?

NW For me “bridge” is a verb. “Bridging” is an active interweaving of many things, such as parts of a landscape, times of the day or one part of the house to another. The Moretti residence has two courtyards with white fiberglass panels that serve as light wells. Sunlight is cast on the white fiberglass panels, and the sunlight is constantly in motion within these courtyards. In the morning, light falls on the walls facing to the east; by midday, the sunlight has moved across the ground, and by the afternoon, the sunlight is moving up the walls facing west. This was the beginning of my understanding of how time connects parts of the day, the day to the night and season-to-season.

Ward’s sketch of the Moretti’s Residence

“Bridging” connects parts of a landscape, times of the day or one section of the house to another. At the Moretti residence in Fort Worth, a pair of courtyards with white fiberglass panels serve as light wells that capture the moving beams of sun.

A raised ipe walkway bridges two of the three cubes that make up Ward’s home. It acts as a threshold connecting the landscape on either side of the house. The “ceiling” features a screen that allows views of the sky and speaks to a more poetic expansion of the home’s concept beyond its physical construction.

At the Holub home, a suspended walkway connects an open-wood screen and the front door. The steel-blade canopy connects earth to sky.

Ipe walkways are featured prominently at Ward’s own home. This one acts as a bridge between the garage and the main house. 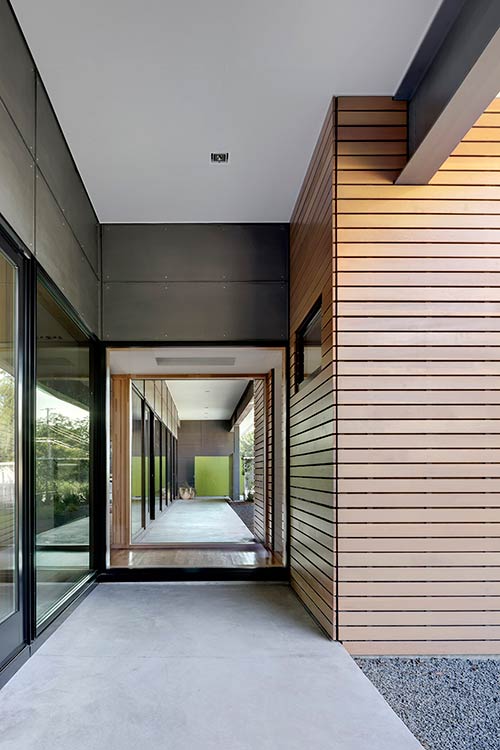 A glass-walled passage leads from the main house to the guest “cube” at the Moretti home. Below, two of the distinct buildings that make up the Huynh house in Cedar Hill are connected by steel and glass. 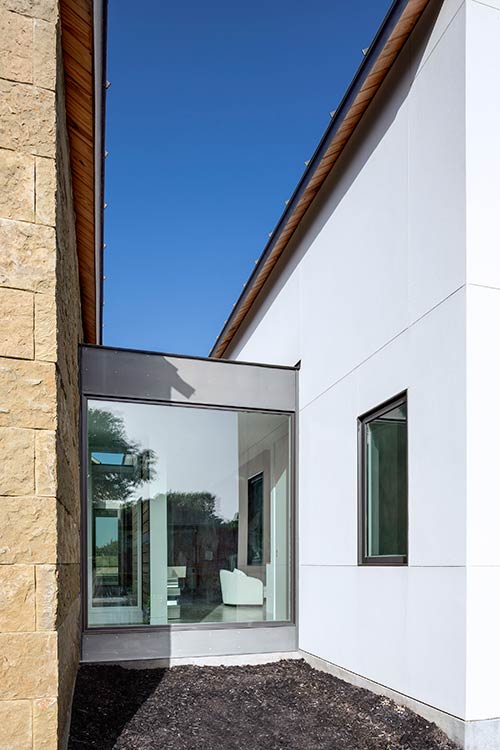